ST. SYLVESTER was born in Rome toward the close of the third century. He was a young priest when the persecution of the Christians broke out under the tyrant Diocletian. Idols were erected at the corners of the streets, in the market-places, and over the public fountains, so that it was scarcely possible for a Christian to go abroad without being put to the test of offering sacrifice, with the alternative of apostasy or death. During this fiery trial, Sylvester strengthened the confessors and martyrs, God preserving his life from many dangers.
In 312 a new era set in. Constantine, having triumphed under the ” standard of the Cross,” declared himself the protector of the Christians, and built them splendid churches. At this juncture Sylvester was elected to the chair of Peter, and was thus the first of the Roman Pontiffs to rule the flock of Christ in security and peace. He profited by these blessings to renew the discipline of the Church, and in two great Councils confirmed her sacred truths. In the Council of Arles he condemned the schism of the Donatists; and in that of Nicaea, the first general Council of the Church, he dealt Arianism its death-blow by declaring that Jesus Christ is the true and very God. Sylvester died A. D. 335. 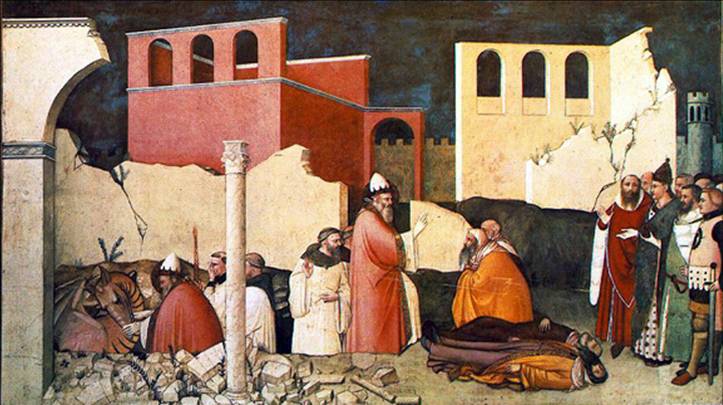 Pope Sylvester I portrayed slaying a dragon and resurrecting its victims, a fresco by Maso di Banco From Wikimedia Commons.

He was elected to the chair of Peter, and was thus the first of the Roman Pontiffs to rule the flock of Christ in security and peace.